Nearly 1 in 3 women have been abused in their lifetime. In times of crises, the numbers rise, as seen during the COVID-19 pandemic and recent humanitarian crises, conflicts and climate disasters. A new report from UN Women, based on data from 13 countries since the pandemic, shows that 2 in 3 women reported that they or a woman they know experienced some form of violence and are more likely to face food insecurity. Only 1 in 10 women said that victims would go to the police for help.

While pervasive, gender-based violence is not inevitable. It can and must be prevented. Stopping this violence starts with believing survivors, adopting comprehensive and inclusive approaches that tackle the root causes, transform harmful social norms, and empower women and girls. With survivor centered essential services across policing, justice, health, and social sectors, and sufficient financing for the women’s rights agenda, we can end gender-based violence.

To raise awareness, this year's theme is "Orange the World: End Violence against Women Now!". Orange is the color to represent a brighter future free of violence against women and girls.

Violence against women and girls is one of the most widespread, persistent and devastating human rights violations in our world today remains largely unreported due to the impunity, silence, stigma and shame surrounding it. In general terms, it manifests itself in physical, sexual and psychological forms, encompassing: 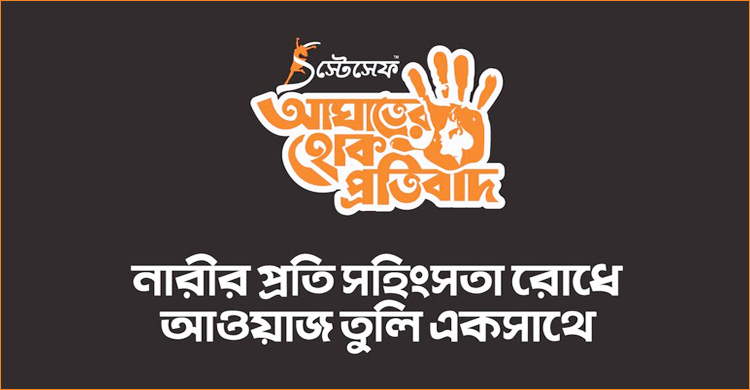 Being the bold and active voice of women, on this occasion, Staysafe, sanitary napkin brand, declaring the coalition with the day with a campaign titled – “আঘাতের হোক প্রতিবাদ,” roughly translated into "Let's protest against violence" with the message “নারীর প্রতি সহিংসতা রোধে আওয়াজ তুলি একসাথে,” roughly translated into "Let's raise voice together to prevent violence against women." With this campaign, the brand would like women to raise voice against such violence and break this silence & stigma of their surroundings. Staysafe believe – The more you know, the better you can protect. Under this campaign, Staysafe has launched an OVC showing different forms of violence women faces in their daily life and how helpless they feel being blamed for being victim. The brand is inviting women to share the violence of their surroundings in their page. Further, from the stories shared, Staysafe will arrange an awareness campaign with Jago FM so that society knows about that and take steps against such violence.-Press Release.