A group of students have continued their agitation programme in the capital’s Rampura protesting the death of SSC result seeker Maenuddin Islam who was crushed under the wheels of a bus.

Around 150 to 200 students from different educational institutions took their position at Rampura bridge around 11am on Wednesday.

The movement of the vehicles in the area was suspended due to the programme.

The students said they will continue the protest until their demands are met.

“Eight out of nine demands have been fulfilled,” they added. 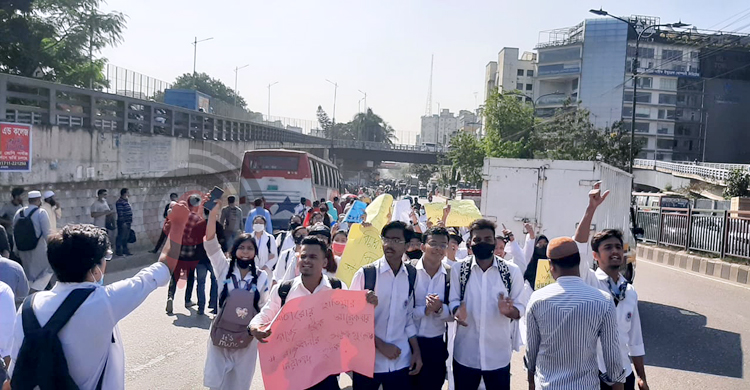 According to the source, the students staged demonstration programme demanding the safe road on Tuesday and they announced that they will hold protest in Rampura from 11am on Wednesday.

In this connection, Rafiqul Islam, Officer-in-charge of Rampura Police Station, said they heard that students took to the street. Adequate police members are in the spot to control the untoward situation.

It is to be noted, Maenuddin was killed on Monday night as a bus of Anabil Paribahan ran over him in Rampura area. Later, agitated people set fire to eight buses. Police seized the killer bus and detained its driver from the spot.