PRAN-RFL Group, country's leading business conglomerate, has targeted to export products worth $1 billion by 2025 and $2 billion by 2030. For the reason, the group wants to export all the products it manufactures for the customers of the country. PRAN-RFL, which is the most diversified exporter in Bangladesh, exported worth $532 million in 2021-22 fiscal year.

Ahsan Khan Chowdhury, Chairman and Chief Executive Officer of the group, announced this at a meet the press event titled “25 years of PRAN-RFL export: Taking Bangladesh to the world” at a hotel in the capital on Sunday.

PRAN-RFL exports products to 7 out of 10 top and potential sectors of Bangladesh. At present, the group is regularly exporting its products in various sectors including agricultural products, plastic products, RMG, footwear, light engineering, chemical products and furniture to different parts of the world. Apart from creating highest employment in the private sector, PRAN-RFL is the most diversified exporter in Bangladesh, which is playing major role in diversifying the country's export.

Ahsan Khan Chowdhury, Chairman and Chief Executive Officer of PRAN-RFL Group, said, “Our group's products are now competing with well-known brands of different countries and are being placed in famous chain shops, which is a matter of great pride for the country. PRAN-RFL Group products are available in chain stores including Walmart, Carrefour, Loblaws, Aldi, Lidl, Mydin, Dollarama and Tesco.”

About 80 percent of Bangladesh's export earnings come from the garment sector. This is why the Honorable Prime Minister has repeatedly laid emphasis on diversifying the export sector, mentioned the chairman of PRAN-RFL Group, adding “this is the time to diversify country’s export. We are working tirelessly to diversify the export of Bangladesh. PRAN-RFL Group wants to lead from the front in this sector.”

Ahsan Khan Chowdhury said, spreading PRAN-RFL products across the globe is one of the main goals of the group. PRAN-RFL wants to export all the products it manufactures and markets for the consumers in the country's market. 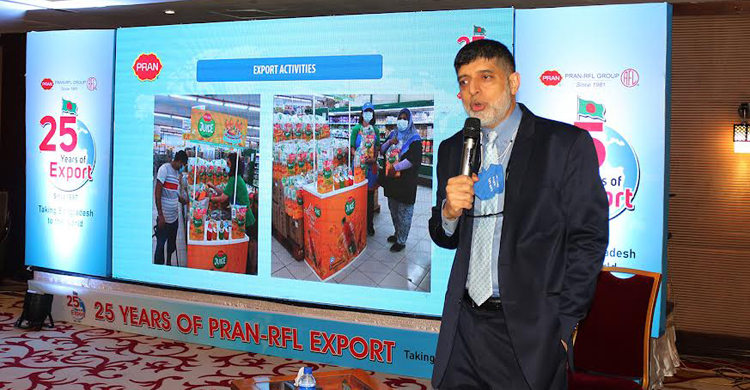 He also said, “We have plan to export PRAN-RFL products to every country in the world. If it is possible to export from Bangladesh, we will do it. In that case, there will be a lot of employment opportunities in the country. If there are any obstacles, we have plan to manufacture products in at least 4-5 places around the world, subject to approval from the government”.

Observing that the export sector of the country has done well despite the global crisis including corona and Russia-Ukraine war, Ahsan Khan Chowdhury, said, "We had a chance to do better. But we have not been able to fully exploit that opportunity due to various reasons including non-availability of liner service on particular routes, increase in freight cost at an abnormal rate and not having enough containers. I am drawing the attention of the government to solve these problems. If these problems are solved, the export of the country's products will increase."

Pointing out that the current government has set an export target of $80 billion by 2024, the Chief Executive Officer of PRAN-RFL Group said that the export sector must be diversified to attain the goal.

Kamruzzaman Kamal, Director (Marketing) at PRAN-RFL Group, Touhiduzzaman, Head of Public Relations and high officials of the group were present at the event.

PM stresses usage of all water bodies for fisheries

72 companies including PRAN to get National Export Trophy