After serving for more than three decades in the Police department, Dr Benazir Ahmed, outgoing Inspector General of Police (IGP) on Thursday said no complaints and no grievances against anyone today.

“I expect that everyone will be fine because of today's Bangladesh is for everyone,” he said while speaking at a press meet at Police Telecom Auditorium at Rajarbagh Police Lines.

Commenting there was a vicious circle of rotten politics in the country Dr Benazir Ahmed said this circle is still alive.

He said, “In our country, there was a kind of bad political practice, and it is still alive. In the process of the bad practice some bad political persons unfairly and irrationally created some people against them.”

“With all together is Bangladesh. Bangladesh is my love. Together we will move forward. To make a welfare state, we will all join hands and fulfill the responsibility from wherever we are,” the IGP said.

He said Bangladesh has reached this stage today after overcoming various obstacles, adding, “Reserve reached $49 billion from only $18 in the country. Per capita income rose to about $3000.” 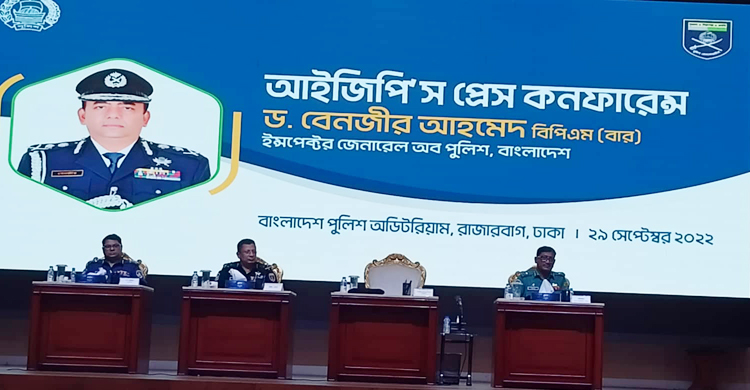 During the time, the country witnessed various poverty, sickness and deprivation and many kinds of political game were also staged, Dr Benazir said.

He said, “I served Bangladesh Police for 34 years 5 months and 16 days, of which in Dhaka for 12 years in three important positions. I have overcome many obstacles in my journey of 12 years. I have been expressing my gratitude to all.”

Replying to a question, Dr Benazir said among many challenges, freeing formalin was the biggest challenge alongside freeing pirates from the Sundarbans.

Apart from this, there was a big challenge for freeing sea pirates from the Sundarbans, as pirates were there about four hundred years ago, he said.

Sanctions on RAB are not intended to punish: US Ambassador